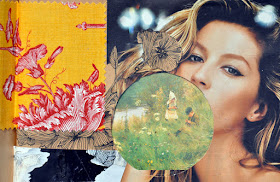 A WOMAN'S LIFE
by Andrew Bertaina

Finally they'd agreed; the house would be painted. They settled on a shade of yellow. She was happy about the color, and he was trending towards ambivalent.

They took breaks to make love while the child was sleeping. Afterwards, she'd sit in the bedroom and watch the starlings drift from the trees like leaves in the fall.

Accidentally, she told her husband that she'd fallen in love with the man who was painting their house.

She did not know if it was really love, or if she'd just missed having someone notice her. He told her that he loved the back of her calves, the spaces between her ribs. Also, he had a wondrous ass.

What would become of the child? A mother frets about these sorts of things. Sometimes, she'd lie in bed and fret over the child, patting the locks of his hair while she slept peacefully below.

Things were not going well between her and the painter. He was good in bed, but the main problem was that he wasn't all that bright. She'd ask, What do you think of Hemingway? or the Middle East? and he'd say, "Not often." For a while it was funny. But being stupid wasn't the sort of thing that you could easily forgive.

Bees pollinate a swarm of purple flowers. A robin hops down and pecks at the lawn. She has never felt a particular affinity with the birds. Her mother had told her that birds were dirty. It had a ring of truth.

They met at a cafe near their old house. The courtyard was shaded by a banyan tree of immense size. Their daughter was playing across the street on a pair of monkey bars. She was a dangerous girl. After a while, she said to her husband, "I'm sorry." He looked across the table at her and said, "I'm sorry, too," which was really just a polite way of saying Fuck off. She did.

In time, her daughter started to grow up. She said things like, "I want to grow up to be an oceanographer, so I can help dolphins." Maybe I didn't ruin her, she thinks to herself as the two of them swing on the porch together. They are both drinking from small glasses of lemonade and waiting for the evening to cool down. Mosquitoes are flying around in the grass. She can see them in the purple sunset light.

A couple of years later, her old husband married someone new. The lady was a school teacher. She was short and seemed to be nice. She had large white teeth and smiled readily. People are always getting married, she thought to herself. Why is this marriage making me so sad?

One year she broke her foot while walking down the stairs after an ice storm. For a while, she felt shitty. She stayed indoors with her foot in a cast, and as she struggled to eat, drink, and go to the bathroom, she thought, So this is why people stay together?

For a while, her daughter wanted a tattoo, and she didn't want her daughter to have a tattoo. Eventually, her daughter got a picture of a rose and a vine, strung up the back of her calf. Her mother thought, what a silly thing it had been to care about.

At her daughter's graduation, she sits with her old husband and the new wife. They are all very cordial. She feels lonely. She spent a long time getting ready for the day, standing in front of the bathroom mirror and appraising herself as if she were going on a date. No matter what she did with her makeup and hair, the mirror kept telling her that she'd gotten old. She started to hate mirrors.

Her daughter did not become an oceanographer. She lived in San Francisco, in a little place on Portrero Hill that overlooked the water. She was doing book keeping for a large company of one kind or another. She'd visited her daughter once and remembered feeling very cold.

When her daughter was fifteen, she'd asked about the man who broke up her parent's marriage. Her mother sat in a rocking chair that had been passed down through her family for generations. It was a really dependable piece of furniture. She was holding a blanket, rocking back and forth, and looking at the floor. "Tell me," her daughter said. Her mother thought for a while and then said, "He was beautiful."

"Oh," her daughter said and left the room to cry.

Years passed as years do. Some years were better than others. In the interim, she got older.

"Everyone in here thinks I'm crazy," she said to her daughter, who was old now herself, as she was wheeled around the convalescent home. She was a little crazy. She sometimes made up stories about the squirrels on the lawn that were narratively inconsistent. Her old husband was dead now. The new wife lived in Florida and golfed year-round. She signaled for her daughter to move closer to her. She had whiskers. "I am crazy," she said, "but I can't stand being here with everyone thinking it." Soon thereafter, she was asleep. Her head was tucked onto her right shoulder, and she drooled. An attendant wheeled her away, and her daughter drove to the airport and then flew home.

He'd come up behind her in the kitchen, tracing his fingers along the back of her thigh. Afterwards, he said, "Do you want to come out and check the work?" She did. She was the one who'd wanted to have the house painted after all. There were clouds overhead doing nothing. The work was a bit shoddy. In spaces, she could tell that the brick had only a thin coat of paint. He seemed proud of himself. Three years from now they'd have to redo the whole thing. She could already see it.

Andrew Bertaina currently lives and works in Washington, DC. His work has appeared in more than twenty publications including: The Three Penny Review, Hobart, Fiction Southeast, Literary Orphans,Whiskey Paper, Eclectica, Prick of the Spindle, Bayou Magazine, and Catamaran Literary Reader. He is currently a reader and book reviewer for Fiction Southeast.

Colleen Maynard is a writer and visual artist based in Houston, TX. Her work is featured in Matchbook, NANO Fiction, SHARKPACK, and Sugar & Rice. She currently exhibits at the Appleton Museum of Art. For more, visit the artist online at colleenmaynard.com and follow her on Twitter.

Miss Lana Rebel is a Tuscon, AZ-based musician. She recorded a live session for BBC Radio One in London, was featured on All Songs Considered for NPR, and was chosen as Best Northwest Country Artist at KBCS in Seattle. Her songs have reached top ten charts on college stations, and have been used on soundtracks for several independent films. Check her out on Bandcamp and lanarebel.com.