Issue #98 Guest Editor Sean H. Doyle is a writer living in Brooklyn, NY, whose work previously appeared in Storychord Issue #82. He works hard every day to be a better person, and is learning to love himself more. His first book, THIS MUST BE THE PLACE, is forthcoming from CCM Press. For more, visit seanhdoyle.com. 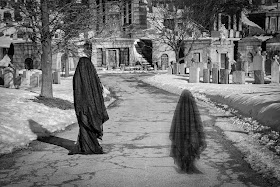 Feeling nostalgic, I drive by my childhood home, only to find it abandoned and boarded up. Demolition feels imminent, thus my camera in the trunk and a roll of film at the ready feels fateful. I break in through the kitchen and spend hours photographing the remains of the house, tearing up at every childhood memory that floods me. So many memories! In my euphoria, I unscrew all the kitchen cabinet knobs—the only transportable items I find—hoping to share my joy with my family. I leave elated, a vandal of memories. But when my mother sees the knobs, she only tosses them back in the paper bag and laughs. Our cabinet knobs were white, she says. Coated plastic. She says, Who were we to have such fine porcelain knobs! Despite the embarrassment and anger I feel, I keep the cabinet knobs anyway. Wherever I move, I take them with me, believing that I may one day install them just to leave them behind.

That year, and all subsequent years, we are to sell wrapping paper door to door to raise money for our small private school. Although I can never remember what we raised money for—was it books? a new gym? ceiling tiles to replace the ones that were water-damaged and bowed in?—I cannot forget nearly every adult who bought the expensive wrapping paper. But do I remember ever delivering the wrapping paper to the adults who bought it? Can I honestly say that we didn’t just take their money and fail to fulfill the orders of promised goods?

I hated seeing presents wrapped in the paper we sold. It wasn’t that the paper wasn’t hideous both close up and far away and it wasn’t that the paper wasn’t foreign to the touch—scratchy and cheaply textured—because it was. It was all of these things and more. The wrapping paper we sold was horrible wrapping paper. What bothered me more than anything was that the rolls were thin and just as soon as you wrapped five presents with your new roll of wrapping paper, you were down to the last sheet. What lunacy, I remember my childish mind thinking. It was the first time I’d ever felt like a crook, and one at that who was so deeply involved in an organized crime she wasn’t even sure how to turn straight.

THE INADEQUACY OF LANGUAGE

At age eleven I am encouraged to work night service shifts in the church daycare. I am cautious of toddlers but in a few weeks’ time I grow to like them and their individual quirks—building things the wrong way, tearing things down, tricking me into giving them more animal crackers than they are allowed. Over time I become at ease in my role as caregiver and my confidence shows. Eventually I am promoted to the nursery, but upon entering a room full of basinets and cribs and howling infants, whatever confidence I’d gained disappears. My unease must be apparent to the parents who come to retrieve their beloved children, and in one night’s time my reputation as a caregiver is ruined. I try everything I can to recover my poise, but all I gain is the frightening knowledge that, for whatever reason, the less able the infants are to understand me, the less able I am to understand them. It is my first demonstration of the inadequacy of language. And it makes more me so fearful of the smallest children in the largest kind of way that over a lifetime I’m uncertain I’ve yet to recover.

When the day’s lesson is over, my sister and I join our piano teacher in the sitting area to play a game of dominos. Although I despise the elementary game at home, I am always exhilarated to play the game in the music studio. Even at that age I must’ve known that the reason I liked the games was because it meant I had to play piano less. But why wouldn’t I want to play piano more? My sister is two years older than me and therefore always better and more practiced than me. We take the lessons together, so there is no escaping how I will always be the lesser experienced. Years later I wonder if we had taken lessons separately, would I still have grown bored and felt inferior and quit piano altogether before I was even old enough to appreciate what I was giving up? Today I can play scales and, on a good day, the right hand of “Jingle Bells” and “Frosty the Snowman.” I often listen to Art Tatum or Count Basie or one of many other fine jazz pianists while I read. But, no matter how much any adoring child begs for my participation, I cannot bring myself to match marble rectangles end-to-end or make any sort of pattern with numbered dots. The mere thought of the simplistic game brings on feelings of failure and wholeheartedly sours my day.

While I am not devout, in three years’ time I knit a bench-length blanket. The imperfections it holds are many, and its finality comes only on the heels of more than one occasion of public scrutiny—for I knitted this blanket knowing only how to knit a single stitch, lacking any skill or foresight to create texture by purling back. Yet after not-knitting years prior to knitting the blanket nor, more important, never knitting again after knitting the blanket, it’s clear to me that the blanket will forever be the knitting masterpiece of my life. When I wrap it around my legs and read a new book under lamplight, feeling as if the blanket belongs in my lap the same way one might believe another’s hand belongs in his or her own, it is difficult to think the blanket contains any imperfections at all.

GOOD WEATHER Whenever the weather turns exquisite on what was previously an indoors kind of day, I become distraught. Given my penchant for avoidance, I hardly can convince myself to venture outside on days that are exceptional at the start. But it’s the sun that taunts me—and the view from my apartment is more blissful than it is fair. What I don’t want is to be wasteful of anything. What I don’t want is to let a beautiful day pass me by without so much as a chance to run in it, through it, wherever the pleasant and thin air seems to float about and take me. So what I am after truly is to leave off this dilemma by means of bad weather. The worst! Rain, sleet, hail, wind that will bend the trees to the earth. Give me the sorriest weather there is, I coldly and selfishly pray.

It was either that we solicited sponsors to donate money by the hour, meaning for every hour we rocked the donors would give an agreed upon amount, times the number of hours rocked, totaling a certain sum. Or it was that for every sponsor, we would rock an additional hour, and our donors would donate whatever amount they saw fit for one hour’s worth of rocking. Or it was that the donors didn’t care how long or at what pace we rocked at all, only that we were putting in the effort, and for that they would simply donate what was in their hearts to give and we rocked only because we feared our donors ever discovering that we had pulled on their heartstrings in vein. Whatever the case, we held the Rock-a-Thon annually no more than four years but no less than three while I was a member. Years later, I still have not come to terms with the motivation for the Rock-a-Thon in the first place. I can only think that we could’ve raked the church’s leaves, carried the elderly members’ groceries, given free dog washes in the parking lot—we could’ve done something useful to raise the money we needed. Instead all we gave the world was motion, one of the laziest kinds at that, and we did it year after year without thinking or a second thought.

Whereas I am walking to a bar to meet a friend for a drink. Whereas I see yards before me a coworker from a previous job approaching. Whereas I haven’t thought of nor spoken to the former coworker in years. Whereas I don’t wish to speak to them now. Whereas it is nothing I hold against them, only that this is a common chain of thoughts that occurs whenever I am confronted with the past. Whereas this has occurred more than once to those I also know in the present. Whereas I can admit my faults, even as I watch myself like a stranger from the outside, and simultaneously see that I am powerless to engage as any caring and considerate person would. Whereas the moment of confrontation is there, is gone.

Michelle Dove is the author of Radio Cacophony, forthcoming from Big Lucks Books in 2016. Recent writing appears in PEN/Guernica, Chicago Review and DIAGRAM. She lives in Washington, DC.

Kelly Mahoney is a Brooklyn-based photographer, living and breathing still pictures since she was a little girl. Graduating from Radford University in 2008, she obtained a degree in Photography and Psychology. Using both degrees, she has been able to combine technical and emotional to capture beautiful portraits. Visit the artist online at kellymahoneyphotography.com.

BELLS≥ is a Brooklyn-based band making mostly non-improvised instrumental music. The project formed in October 2009 and is made up of Zach Barocas (Jawbox, The Up On In, et al.) on drums, Chris Ernst on electric guitar, Karen Gache on electric bass guitar, and Stephen Shodin (Blood City, Coup Fourre) on electric guitar. For more, visit bellstheband.com.